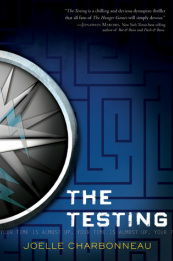 From the Publisher:  "It’s graduation day for sixteen-year-old Malencia Vale, and the entire Five Lakes Colony (the former Great Lakes) is celebrating. All Cia can think about—hope for—is whether she’ll be chosen for The Testing, a United Commonwealth program that selects the best and brightest new graduates to become possible leaders of the slowly revitalizing post-war civilization. When Cia is chosen, her father finally tells her about his own nightmarish half-memories of The Testing. Armed with his dire warnings (”Cia, trust no one”), she bravely heads off to Tosu City, far away from friends and family, perhaps forever. Danger, romance—and sheer terror—await."
Who is Joelle Charbonneau?
Houghton-Mifflin's Book Trailer for The Testing:
Like so much popular contemporary fiction, The Testing is an example of a DYSTOPIAN novel:

Please make certain to have the book read in preparation for our next meeting on Tuesday, October 28th!

And if you like The Testing, don't forget to look for the other books in the series: