Our March selection is
Wonder
by P. J. Palacio

"I won't describe what I look like.  Whatever you're thinking, it's probably worse." 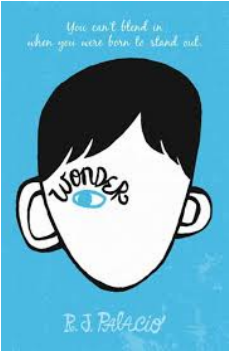 Save your $$$!  Don't buy the book, unless you just want your own copy.  We have purchased this book for later use as a middle school novel set and will give you a copy at our next meeting.
From the Publisher:
"August Pullman was born with a facial deformity that, up until now, has prevented him from going to a mainstream school. Starting 5th
grade at Beecher Prep, he wants nothing more than to be treated as an ordinary kid—but his new classmates can’t get past Auggie’s extraordinary face.
Wonder, now a #1 New York Times bestseller and included on the Texas Bluebonnet Award master list, begins from Auggie’s point of view, but soon
switches to include his classmates, his sister, her boyfriend, and others. These perspectives converge in a portrait of one community’s struggle with empathy, compassion, and acceptance."

ATOS RL = 4.8
AR Quiz # 149900EN
Point Value = 11
Who is R. J. Palacio?  This link to the author's official web page, includes an excellent section of "annotations," in which she offers explanations of many of interesting/curious references in the novel.
Reviews?
"In a wonder of a debut, Palacio has written a crackling page-turner filled with characters you can't help but root for."  Entertainment Weekly

Nicholas Sparks, author of The Notebook:  "Wonder touches the heart is the most life-affirming, unexpected ways, delivering in August Pullman a character who readers will remember forever.  Do yourself a favor and read this book -- your life will be better for it."

"Rich and memorable. .  .It's Auggie and the rest of the children who are the real heart of Wonder, and Palacio captures the voices of girls and boys, fifth graders and teenagers, with equal skill."  The New York Times Book Review
Book Trailer?